What is Azoospermia – A General Overview

Male infertility refers to the disease of the male reproductive system which leads to difficulty or inability in conceiving, depending on the underlying causes. The male reproductive system is responsible for the production of male sex hormones in addition to the synthesis, transport, and ejaculation of sperms (male sex cell). Any alteration in the concentration, delivery or genetics of the sperm may result in male infertility. A normal sperm count should be in the range of 15 to 200 million per mL of the ejaculate. Lower sperm count is known as oligospermia while zero sperm count is called azoospermia. Azoospermia causes can be divided into two major groups: Obstructive and Non-Obstructive. Non-obstructive azoospermia (NOA) is the more common of the two. NOA results in lower or no production of sperms, which in turn can be due to the presence of varicocele i.e. damage in the valves of the veins surrounding the testes. Varicocele azoospermia is reported in about 14% of the cases leading to male infertility. Most people still maintain an impression that the female in the couple shoulders the total blame for not being able to conceive. Nevertheless, data concludes that in over 30% to 50% of cases of infertility, the male factor is either the sole reason or at least plays a partial role in the inability to achieve pregnancy. It is, therefore, important to consider ruling out symptoms of infertility in both, the man and the woman, before moving on to alternate options for becoming parents. 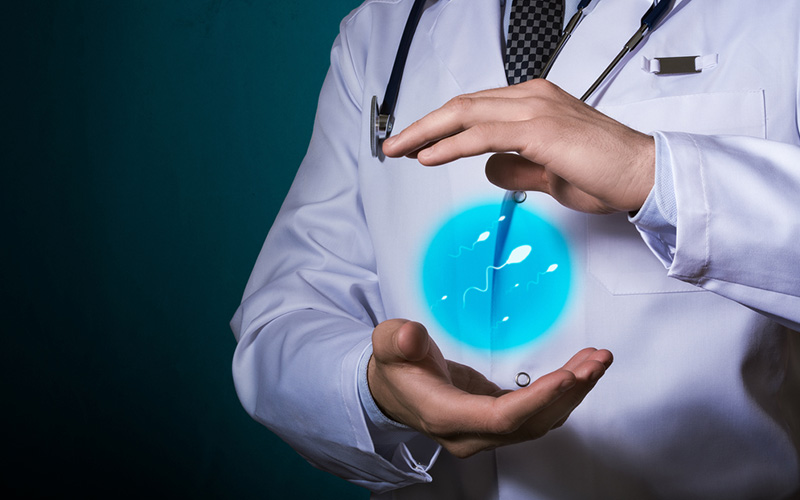 How does varicocele azoospermia cause Infertility?

The primary reproductive organ in the male reproductive system is the testes, which are situated outside the body, along with the scrotum and the penis. Sperms are generated in the testes and the production of primary sex hormone, testosterone is also at this site. The anatomy of the human body at every hierarchy is such that the form follows function. Since spermatogenesis and maintenance of sperms require a temperature below 98.6 °F, major male reproductive organs are situated outside the body. Additionally, the scrotum also ensures temperature control around the testes. Understanding homeostasis of temperature in the testes is important to rationalize varicocele azoospermia. Varicocele causes a temperature elevation of the testes, and an accumulation of deoxygenated blood also results in the generation of oxygen free radicals, threatening the genetic integrity of the sperms. The sperm count may greatly be affected because of the varicocele, but varicocele repair can restore fertility in men.

In most cases, the patient realizes they have azoospermia once they go through several failed attempts at intentional conceiving and have ruled out everything else. Although specific azoospermia symptoms are not as prominent, the symptoms of underlying conditions may present themselves. In the case of varicocele azoospermia, a slight discomfort/pain and swelling around the testes are the eminent signs. Once azoospermia is confirmed in a patient, there is no need for them to panic, especially if this is due to varicocele. Varicocele infertility is reversible in most cases. If the underlying cause of azoospermia is varicocele, then azoospermia and varicocele repair can go hand in hand. To diagnose varicocele, a special Scrotal Doppler ultrasound is performed, which requires the patient to be examined first in a lying position and then in a standing position. To build intra abdominal pressure that allows for an easy visualization of any enlarged veins, valsalva maneuver is performed. This is a method wherein the patient is asked to take a deep breath, hold it and apply pressure downwards, similar to that when defecating, and then start breathing out. Last but not the least, It is substantial that a DNA fragmentation test of the sperm is also conducted to assess the extent of DNA damage and viability remaining in the sperms.

Azoospermia treatment in Pakistan which is linked to varicocele has long been rendered outdated due to its invasive and recurrent nature. The best varicocele treatment in Pakistan to reverse azoospermia is conducted by Dr Imtiaz Ahmad. One of the most versatile and successful approaches towards azoospermia and varicocele repair is the 3-D precision-guided endovascular treatment, which is a non-surgical procedure involving embolization and has been introduced in Pakistan by Dr Imtiaz Ahmad, a pioneer of this technique. No incisions or general anesthesia is required during the 45–60-minute procedure. To begin, a microcatheter is passed through the femoral or the jugular vein and guided under live x-ray imaging towards the testicular/gonadal vein. A contrast dye is then introduced to visualize the damage in veins, which enables an easy correction procedure. FDA approved drugs, that can only be released to and administered by licensed physicians in the US, are used to perform the embolization of the faulty veins. Once the blood is stopped, it flows through a different vein along the normal route, only this time, the varicocele is not disturbed and complications like azoospermia are, thus, solved. The patient is examined and sent home the same day, in most cases. The entire procedure has gained a lot of patient compliance as opposed to the surgical techniques, where the recovery time, alone, is of 2 to 3 weeks. Reports have suggested sperm count improvement in about 83% of patients post embolization method, versus 63% via surgical ligation.

Azoospermia does equate to zero sperm count, but it does not translate into an absolute possibility of never being able to have biological children. Males must be mindful about the activities that involve straining their reproductive organs, including sports. Additionally, knowing the logical reasoning behind the optimal temperature required for spermatogenesis, one must avoid wearing garments that are too tight, making frequent visits to the sauna or other habits that may alter the thermal homeostasis of the testes. These are some of the pointers that should help prevent azoospermia. As a rule of thumb, the health of a person largely depends on their dietary and lifestyle habits. These may not present their pros or cons immediately, but irreversible effects become prominent with age.